In this lab, you will work with drawings of rock layers from different locations. Each layer will contain at least two fossils. Using the fossils as clues, you will organize the layers from oldest to youngest.
2
1
Desmatosuchus was a crocodile relative that lived only during the Triassic Period. Horsetails are plants that first appeared in the Triassic Period and still exist. Which of these organisms would be more useful as an index fossil for the Triassic Period? Why?
3
4
Luke found a box of photos labeled 1970–1995. Each photo shows his entire extended family. No dates appear on the photos. Luke knows that his grandmother died in 1985 and his uncle was born in 1975. Luke’s sister was born in 1990. Sort the photos into four batches by indicating who you would see in the pictures.
Make four groups of picture based on who you can see in the pictures. Complete the year ranges, and who is seen in each photo.
Activity Procedure

You will use fossils to order the rock layers pictured at the end of this lab. Nine of the layers represent periods from the Paleozoic and Mesozoic Eras. One layer represents the Cenozoic Era.

1. Cut out each drawing of a rock layer. note: The fossils are not drawn to scale.

2. Spread out the layers on a flat surface. Use the Key to Fossils to identify the fossils in each layer. Write the names of the fossils on the drawings. note: Some of the drawings represent one species or one genus. Some represent a higher taxonomic level.

4. Look for fossils that are found in only two layers. Using this information, pair up layers that must represent consecutive periods in the geologic record.

5. Use other fossils to determine which layer in each pair is older and the order of all the layers from oldest to youngest. 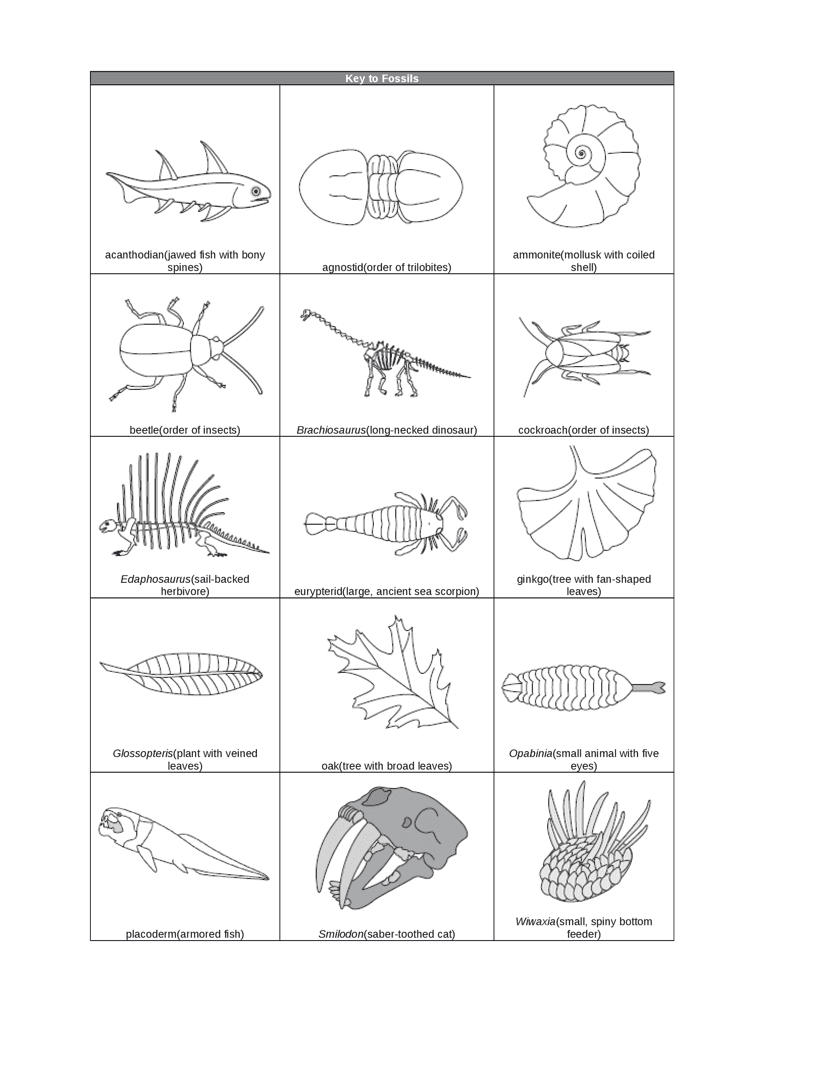 4
10
Identify the correct order of the rock layers using the letters.
5
1
What did you have to use to align the fossil record correctly?
6
1
What sections were the most difficult to arrange? What was the issue?
7
1
How were you able to determine which of the two layers containing a Glossopteris fossil was the older layer?
8
1
Why might a placoderm be a more useful index fossil than a cockroach? Explain.
9
1
Ammonoids are found in rock layers from six different geologic periods. Yet ammonoids are considered excellent index fossils. Explain why this is possible.
10
1
During this activity what dating method did you use?
Relative
Radiometric
Identifying Index Fossils

To be considered an index fossil, it must meet 3 criteria:

1. The fossilized organism must be easily recognizable. It must be easy to ID and look unique.

2. The fossils have to be geographically widespread, or found over large areas so that we can use them to match layers separated by huge distances.

3. The fossil must have lived for only a short time, so that it appears in only horizontal layer of sedimentary
rocks.
11
1
THE DIAGRAM BELOW SHOWS SEVERAL ROCK OUTCROPS SEPARATED BY LARGE DISTANCES. IN EACH OUTCROP ARE SEVERAL FOSSILS. WHICH OF THE FOSSILS SHOWN IS AN INDEX FOSSIL? CIRCLE YOUR ANSWER!!!
Remember the rules posted above!
How can we use Index Fossils?

We can use index fossils and key beds to correlate, or match rock layers that are the same age. By doing this we can then place other layers of rocks in order of their relative ages to find the oldest and youngest rocks in a series of outcrops.

For Example: Examine the outcrop below and determine which layers are the oldest and youngest
Index Fossil Figure 1. 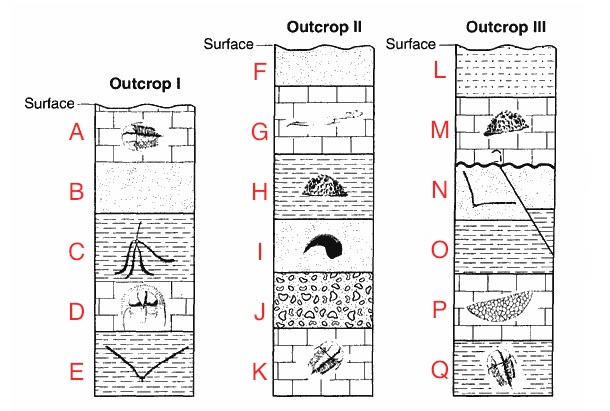 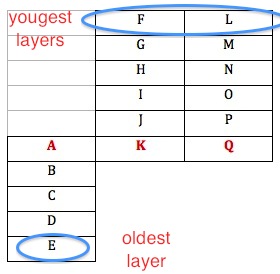 13
14
13
2
EXPLAIN why the rock layers F & L MUST be the youngest
14
2
Explain how we know A, K, and Q are the same age even though they do not occur at the same depth in the rocks.
Add to my formatives list