Starfish: Part 3 of 3: Internal Dissection and Identification
starstarstarstarstarstarstarstarstarstar
by Kathy Egbert
| 21 Questions
Before you begin Part 3, you must complete Part 2.
1
2
The last physical task you had in Part II was to cut off the tips of the trivium rays. You were also instructed to study the pictures and diagrams provided to identify the structures in the cross-section view of the ray.
Locate the coelom and be prepared to identify its location. Raise your hand for the teacher to confirm that you have successfully identified this space. (2 pts)
1. Using the hand lens examine the cut end of the ray to locate the tube feet and ampullae. At the external end of eachtube foot is a sucker. The internal end of a tube foot forms the ampullae, a small, muscular, bulblike sac.
2. Observe that the ampullae and tube feet are found along the edge of a zipper-like ridge that extends the entire length of the ray. The ridge is composed of rows of ossicles, or skeletal plates, which are embedded in the soft body wall. These plates make up the endoskeleton, or inner skeleton, of a starfish. This meshwork of plates also gives rigidity to the body of the starfish and protection to the tube feet while allowing the rays to bend and twist.
3. Examine the cross section which shows how the lateral canals connect the tube feet to the radial canal. This radial canal runs the complete length of each ray. Radial canals are very small and they are not visible in the preserved specimen unless the specimen has been specially injected with dye. Water moves from the madreporite to the ring canal (neither shown here) to the radial canal to the lateral canals which then fill the ampullae. The water stored in the ampullae is used to move the tube feet up and down.
Cross sectional view of a ray 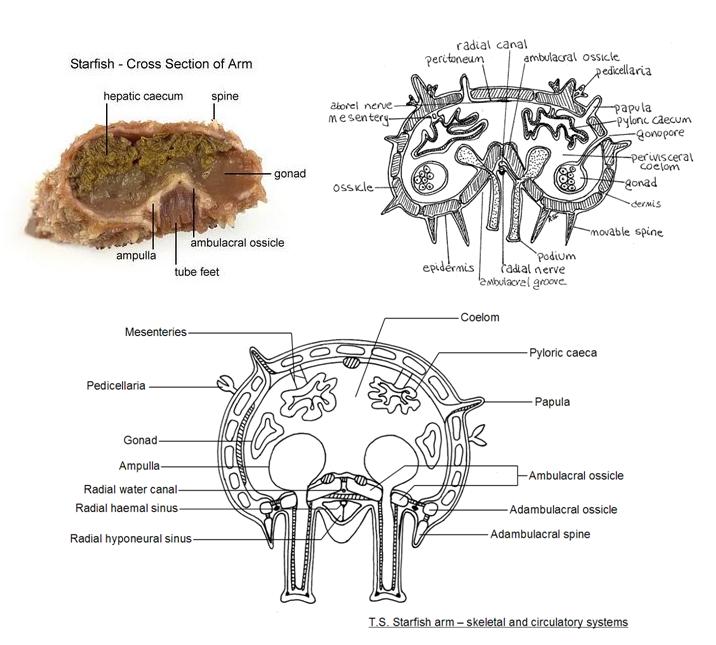 2
6
Draw a line connecting the structure in the cross-sectional view of the ray with its name:
1) coelom 2) ampulla 3) tube feet 4) sucker 5) ossicles 6) spines
Cutting lines

Removing the skin on the rays...
When dissecting the starfish, you will be uncovering layer by layer the various systems in the starfish.

Watch the following video as a PREVIEW of what you will be doing. It is helpful so you will have an idea of what you are looking for with each layer of dissection. Do not follow the directions in the video as you are watching it. You will follow the written directions that follow this Content Box.

Digestive System pictures to use for identificaion 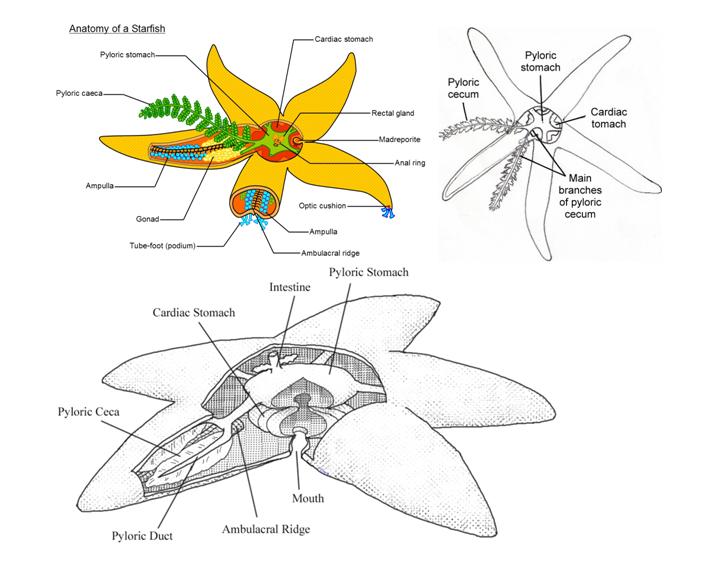 Digestive System in a Starfish
Observe that most of the space in the ray is occupied by the pyloric caeca, two long digestive glands. Each ray contains caeca, or pouches. (They are usually some shade of brown and look feathery.) The ducts, or tubes, carry enzymes form the caeca to the stomach.
Observe the stomach under the central disc. Locate the duct leading to the pyloric caeca.
Locate the short tubular intestine that extends from the stomach to the anus in the middle of the central disc. Sometimes this gets damaged while removing the flap covering the central disk.
Attached to one side of the intestine is a two-or-three branched intestinal caeca. Some or all of these, the intestine, anus, and intestinal caeca, may not be distinguishable in your specimen.
Starfish have two stomachs; the cardiac stomach, and the pyloric stomach. The cardiac is a sack-like stomach found in the center of the body. It can be pushed out of the starfish's body and used to engulf food. Some starfish force open mollusks (clams) by injecting their stomachs into the shells. With the stomach inside, the starfish digests the mollusk in the shell. The pyloric stomach is connected by two pyloric caeca- hollow tubes that absorbs nutrients from its food. The pyloric stomach is closest to the aboral side of the starfish and is on top of the cardiac stomach which is directly over the mouth on the ventral side of the starfish. Starfish eat many things, like barnacles, snails, sea urchins, clams, and mussels.
3
6
First: draw connecting lines from these structures to their names in the picture:
1) pyloric caeca, 2) pyloric duct, 3) pyloric stomach, 4) cardiac stomach, and 5) anus
Second: Locate the pyloric caeca in one of the rays. Raise your hand and wait for the teacher to come and confirm your identification.
4
1
The starfish has two stomachs.
True
False
5
1
The mouth is located on the dorsal side of the starfish.
True
False
6
1
Looking at the starfish from the dorsal side, the mouth is on top of the stomach.
True
False
7
1
The anus is located in the central disk on the dorsal side of the starfish.
True
False
8
1
Looking at the starfish from the dorsal side, the anus is under the stomachs.
True
False
9
1
There are two sets of pyloric calea and two pyloric ducts in each ray.
True
False
Sexual Reproductive System - Locating the Gonads 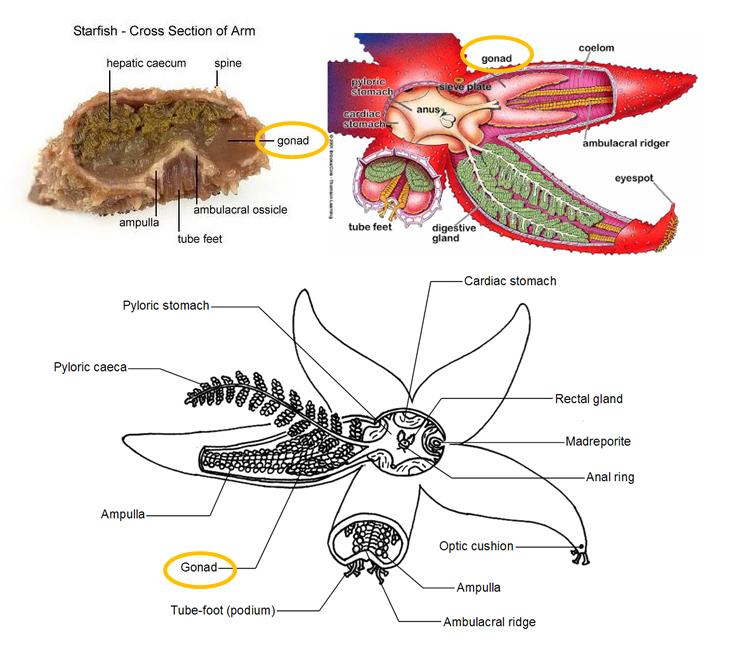 Sexual Reproductive System in the Starfish
Carefully and gently remove the entire pyloric caeca from the dissected ray of the starfish.
Locate the gonads under the pyloric caeca. Especially in preserved specimens, it is difficult to recognize the gonads because they are only a slightly different shade of brown and texture compared to the pyloric caeca.
The gonads are usually small except during the spawning season. There is one pair of gonads in each ray. The ovaries are orange and the testes are gray in living specimens. The gonads in preserved specimens may lose their true color.
10
6
Select the correct name for each of the structures shown in the picture and put the correct number next to the list of structures (3, 5, 6, 7, 8, 9).
11
1
How many gonad pairs are in the starfish species you dissected?
12
1
Try to determine the sex of your specimen.
A Male
B Female
C Can Not Be Determined
13
1
Speculate on whether your specimen was collected during the spawning season.
A Yes
B No
C Can Not Be Determined
A couple of views of the Water Vascular System in the Starfish 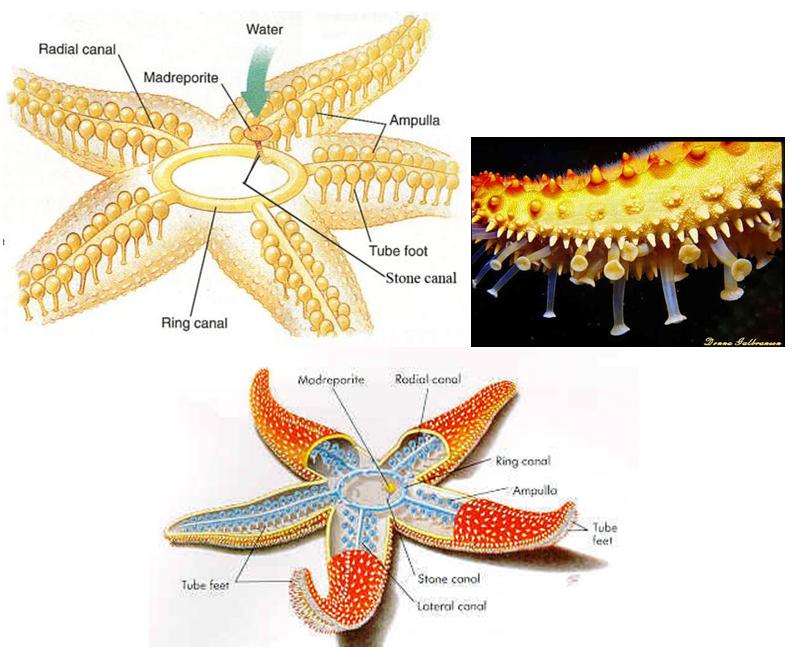 Water-Vascular System
Carefully remove the gonads from the ray of your starfish. Also, remove any of the digestive system that hasn't been removed in the ray and the central disc. Be careful to keep the madreporite attached.
The water vascular system of the starfish consists of a series of seawater filled ducts that function in locomotion and feeding. The system provides the water pressure that operates the animal's tube feet.
1. Water enters and leaves the system through the madreporite which is connected to a circular ring canal by the stone canal. 2. The water is then distributed to the radial canals that pass into each of the rays. 3. Lining the ridge through which each radial canal passes is a double row of bulb-like structures called ampullae. 4. The ampullae are connected by lateral canals. 5. The ampullae are connected to the tube feet which project from the ambulacral groove on the ventral surface of each ray.
Water from the radial canal collects in the ampullae. Contraction of the ampullae causes the tube feet to elongate as water is forced into them. Expansion of the ampullae results in shortening the tube feet. The canals are like a network of water pipes attached to the tube feet. Thus, through the use of small suction discs at the end of each tube foot and the alternate expansion and contraction of the ampullae, the starfish is able to move.
14
10
Demonstrate your understanding of the water vascular system by drawing one red line starting at the madreporite and showing its route to just one of the tube feet. Connect the structures listed for the water vascular system to their location in the starfish by connecting them with a line.
15
1
What happens to the direction of the flow of water when the tube feet contract?
A The water continues to flow forward and is pushed out of the starfish through the sucker.
B The water changes direction and goes back into the starfish.
C Nothing happens to the direction of the flow of water.
16
1
The suckers on the end of the tube feet can attach to a clam shell and slowly pry it open.
True
False
Starfish have an endoskeleton made of ossicles

Skeletal System in Starfish
Now everything should be removed from the ray of the starfish allowing you to observe the skeletal plates.
Starfish have mesodermal endoskeleton (endo- meaning the skeleton is inside) with small calcareous ossicles (bony plates). Their bones are very flexible, allowing them to move around freely. Ossicles in the skin provide support, protection from predators, and wave action allowing the starfish to move all directions.
Application - pictures for Questions 17 and 18