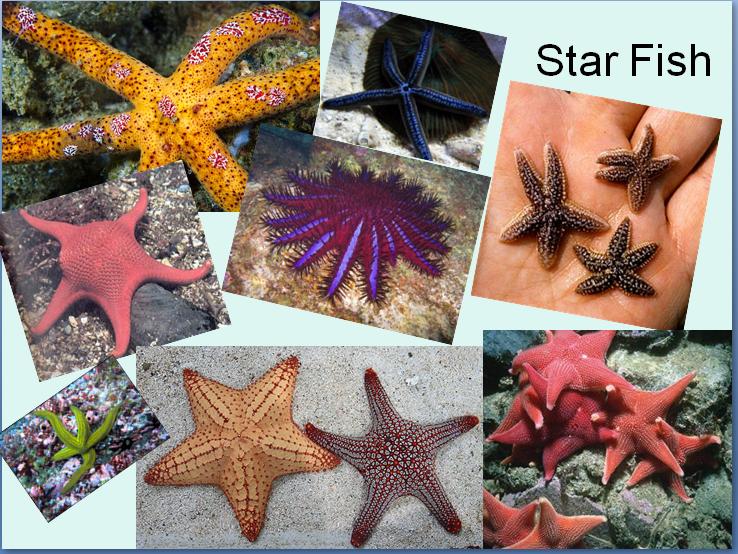 1
0
Name:
Class Period: Date:
Part I: Introduction
Why was the starfish (an echinoderm) selected for us to study? Look at the cladogram, pictures, video and read the text below to answer this question. 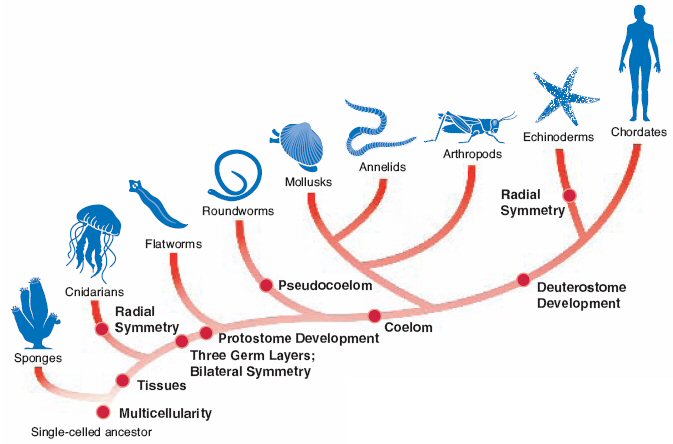 Find the node trait for "coelom" on the cladogram and recognize its structure in the picture. 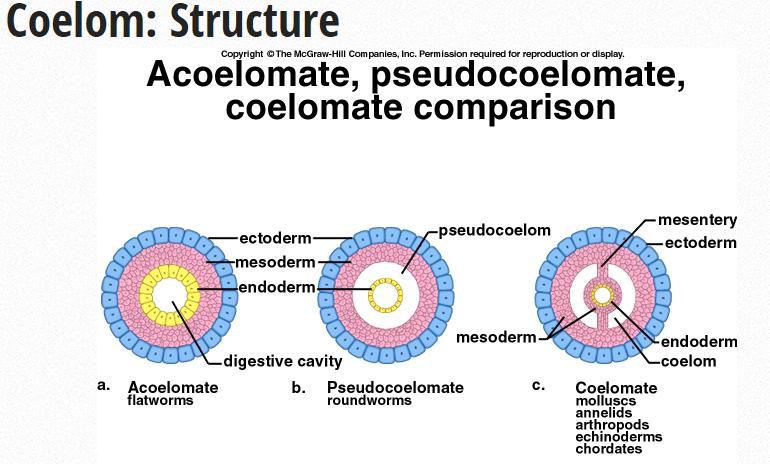 2
2
The node trait "coelom" developed prior to the node trait "bilateral symmetry" on the cladogram
True
False
3
2
Besides echinoderms and chordates, molluscs, annelids, and arthropods also have coeloms.
True
False
You will be asked to label and identify the coelom on your starfish specimen during Part 2: Internal Dissection . Make sure you know what the coelom is so you will get credit for identifying it inside your starfish.
New secret uncovered about starfish by two biology students...
Jun 12, 2015: Two biology students from the University of Southern Denmark have revealed that starfish are able to squeeze foreign bodies along the length of their body cavities and out through their arm tips. This newly discovered talent gives insight in how certain animals are able to quickly heal themselves. The video clip is in Danish with English subtitles, so you will need to read what they are saying.
4
1
The starfish was able to move and expel the microchip and magnet out the tip of its ray because its coelom is a cavity or space inside the starfish that is filled with watery fluids.
True
False
Make sure you can pronoun coelom [see-luh m] by watching the next little video clip.
Recognize the difference between protostome vs deuterostome embryonic development


Echinoderms are one of the animal groups most closely related to the vertebrates because echinoderms and vertebrates share a common ancestor and similar patterns of development. (Vertebrates [Chordates] includes man, and all other animals that have a backbone.)

The phylum Echinodermata consists of mostly marine, bottom-dwelling animals. The phylum is so named because of the presence of spiny plates (calcareous ossicles), which form a dermal skeleton. Echinoderms are typically radially symmetrical (although the larva is bilaterally symmetrical), and they have true coeloms [see-luh m] arising as outpocketings from embryonic mesoderm of the gut. It is on the basis of this last characteristic, and because the bipinnara larva more closely resembles the chordate larva, that the echinoderms are said to be more closely related to the chordates.

A unique feature of the echinoderms is a derivative of the coelom known as the water vascular system, a system of tubes that are filled with a watery fluid. Although a circulatory system is present, it is greatly reduced. Thus, the coelomic fluid acts as the principal medium for the transport of food and respiratory gases. Echinoderms are Deuterostomes as opposed to being Protostomes. The phylum Echinodermata is the only major group of invertebrates that undergoes deuterostomic (second mouth) development in that the embryonic gastropore becomes the anus and the "second mouth" forms as a new opening.

5
2
Find the node trait "deuterostome" on the cladogram. The Deuterostome embryonic development trait occurred
A before the Protostome development trait.
B after the Protostome development trait.
C before the development of the coelom trait.
D before the radial symmetry trait.
6
2
Starfish are the most closely related invertebrate to the chordates which includes humans because
A they share a common ancestor and similar patterns of embryonic development.
B they have a true coelom.
C their larva more closely resemble chordate larva.
D A, B, and C are all correct.
7
2
So, the answer to why we are studying the starfish is because it shares many of the same developmental traits as us.
True
False
Let's look at some general information about starfish...
Kingdom: Animalia Phylum: Echinodermata Class: AsteroideaThe starfish, or sea star, is a spiny-skinned marine invertebrate that belongs to the phylum Echinodermata. From the Greek, “Echin” meaning prickly and “derma” meaning skin. These animals often are referred to as spiny-skinned animals because their bodies are covered by hundreds of spines. Thus, this group of animals is appropriately named. Brittle stars, sand dollars, sea cucumbers, and sea urchins are types of echinoderms.Starfish are the most familiar echinoderms and they are found in coastal waters and along rocky seashores in all the oceans around the world. They are only marine animals. They feed on oysters, clams, fish, snails, barnacles, and worms. Starfish are known for their characteristic star-shaped bodies. They have five rays, or arms, branching out from a central disc. Because of their division into five parts, starfish are said to have pentaradial symmetry. During our study of the starfish you will examine its external and internal structures.
Starfish get their name from their star-shaped bodies. For example, the common starfish, Asterias rubens, has five rays, or arms, that radiate from a central disc. When their rays break off, starfish are able to regenerate, or grow back, new ones. Sexual reproduction by means of external fertilization produces ciliated and free-swimming larvae. Within a few weeks, each larva settles on the ocean bottom and develops into an adult starfish.
The starfish body has other distinguishing features. Hundreds of small spines project through the epidermis from the endoskeleton. In the mesoderm, the skeleton itself consists of calcium-containing plates that are held together by skin and muscle tissues. The ventral surface of the disc contains the mouth. The stomach is located above the mouth, and digestive glands are found in each of the rays. The water-vascular system provides for locomotion and food-getting.
About 1700 species of starfish have been described. Some species have been collected at ocean depths of up to 6000 meters. Starfish range in color from yellow and orange to red, blue and brown. The number of arms may reach as high as 50 in some species.
Look at the pictures below to recognize several other Echinoderms.

8
1
Give another common name for the starfish.
9
1
To what phylum does the starfish belong?
A Animalia
B Echinodermata
C Asteroidea
D Crinoidea
10
1
The scientific name for the starfish is Asterias rubens.
True
False
11
1
The name "echinodermata" literally means "prickly skin".
True
False
12
1
Echinoderms are found in fresh water and marine habitats all over the world.
True
False
13
1
The two major characteristics of the echinoderm phylum are...
A prickly skin and a coelom.
B five part symmetry and regeneration.
C pentaradial symmetry and prickly skin.
D a coelom and capability to regenerate.
What does a starfish eat?
In this next video, you can see the starfish's stomach pushed out of its mouth. This allows the stomach to surround its prey and consumer it on the outside of starfish's body. The starfish's ability to push its stomach outside allows the starfish to eat much larger prey than what it would normally be able to eat.

14
1
Starfish are categorized as predators, consumers, and carnivores.
True
False
15
1
Starfish can push their stomach out of their mouth to devour prey outside of the starfish's body.
True
False
16
4
Phytoplankton use photosynthesis to make their own food and zooplankton eat phytoplankton. Oysters eat zooplankton and starfish eat oysters. Insert these organisms into the energy pyramid in their appropriate levels. (Tip: Energy Pyramids are shown on pg 418 in your textbook)
Catching food to eat isn't always easy for the starfish...
Asexual reproduction in star fish is called "regeneration"
Starfish have been serious predators of oyster beds. At one time oyster fishermen caught starfish, cut them up and threw them back into the ocean. Then, it was discovered that each of the pieces could regenerate, growing into another starfish. Today, “sea mops” made of cloth are dragged over the oyster beds to entrap the starfish. The starfish are then exposed to the sun to dry.
17
1
Some starfish can regenerate from a single ray because most of their internal structures are inside the rays.
True
False
18
1
Asexual reproduction is faster and more efficient than sexual reproduction in starfish.
True
False
Starfish also have sexual reproduction. It is called spawning. Females release eggs and males release sperm into the water and amazingly they find each other and the eggs are fertilized.
Once the egg is fertilized it begins its life cycle. The larva stage doesn't look much like the adult star fish. Here are some examples of star fish larva: 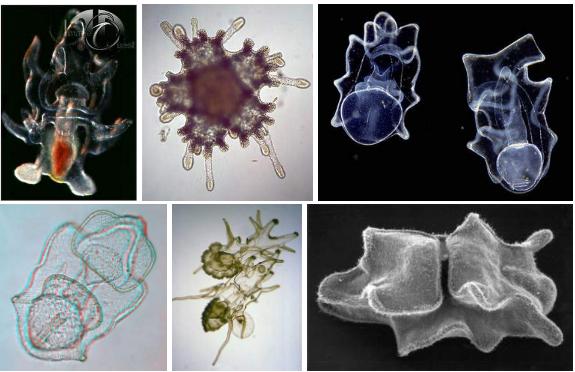 Here is an animation showing the development from egg to larva to star fish.
Starfish Behavior. Sometimes the ocean isn't a hospitable place and starfish can become dislodged and turned on their back during storms. If a starfish is on its back, it can't eat, so it needs to get turned over.
19
1
Starfish predators include other species of starfish, Manta rays, some sharks and other large, bony fishes like to pick starfish off the bottom of the ocean, crunch them up and eat them. In addition, small starfish need to be on the lookout for larger starfish, which will sometimes attack, kill and eat them.
True
False
Review video (about 5 mins)
Add to my formatives list